2017 - A gesture system for graph visualization in virtual reality environments 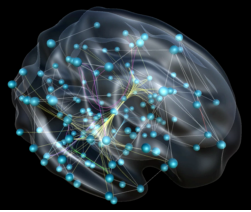 This immersive analytics system is dedicated to support understanding of the human brain. Indeed, each node represents a region in the brain and each edge represents a correlation of the functional connectivity between each region. Moreover, two views are available, one placing the nodes based on their position of the human brain, the second using a force directed graph algorithm.

Hand-gestures are used to interact with the visualization. To rotate and scale, the user closes both fist to “grab the view” then hand movement while move the view similar to touch device interaction. Nodes and edges can be grabbed, move then released by clinching and opening the fist. Last, nodes can be aggregated or split using a clap gesture.