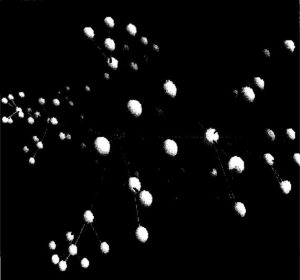 This immersive analytics system is destined to graph and network data analysis. The representation used is the classical node-link representation using a force-directed placement algorithm for the default position. The innovative aspect resides in the fact of using a heat model (thermal conduction and heat radiation) allowing to change dynamically the attractive power or repulsive power of nodes.

To do so, the system uses hand-gesture through the use of dataglove. For instance, a user can “pinch” a node, move it and then release to a new position. The user can also lock a node in place by putting his hand on top of it and doing a wrist rotation like you are turning a key in a hole. Moreover, temperature of the node can be changed by putting your index on the node with an opened thumb and making a wrist rotation similar to controlling a potentiometer, higher the temperature the more repulsive is the node and temperature are transmitted through link as well. Last, the user can send a heat wave by doing a pointing gesture with an opened thumb. The opening of the thumb determining the angle of the heat wave.