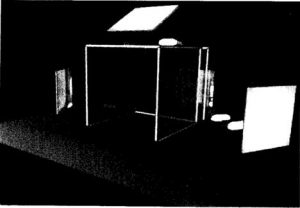 The CAVE was an important device for the virtual reality community and multiple test application was run onto it in 1993 when it was released. Many of those applies to the immersive analytics field such architectural walk-through with access to the databases information, cosmic data exploration to observe the evolution of the universe, a fractal explorer, observation of computation inside an intel processor, observation of brain data in the form of 3D MRI representation… Most of those systems shared the same interaction means using a combination of physical locomotion with a tracked 3D mouse called a wand, the wand allowing the user to move itself or the dataset when physical locomotion was not enough. Moreover, selection was possible due to ray casting techniques employed and button selection.