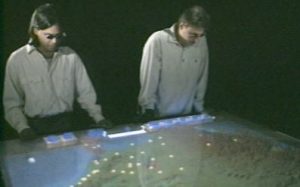 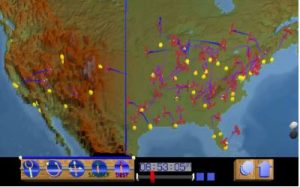 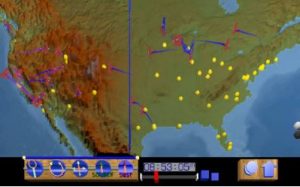 The two-users responsive workbench was developed to solve an important limitation of its ancestor in the form of collaboration. Indeed, in the first version of the responsive workbench only one user position is tracked, thus while working in collaboration only one user has the correct perspective making some natural interaction such as finger point irrelevant. The two-users responsive workbench display 4 images per frame and compute the position of two users (2 image for stereo times 2 users) solving this issue.
The system was used to analyse plane trajectory over a map of the US in a collaborative way, focusing on the comparison between cross region (blue trajectory) and inter region (purple trajectory) flight.