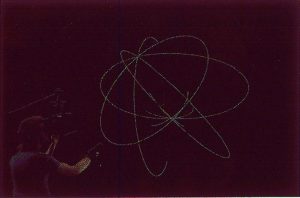 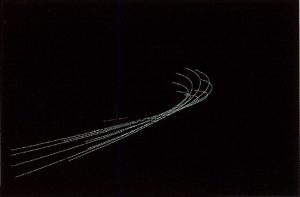 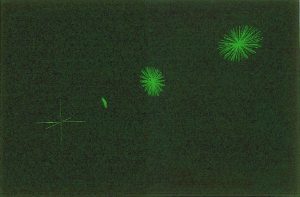 To understand equation of the theory of relativity it is needed to understand the 4-dimensional space composed of the three spatial coordinates and time coordinate. The use of virtual reality allows to directly represent 3-dimension, only requiring abstraction of the 4th. The virtual spacetime allows physicists to visualize the curved space time by displaying interactive geodesics. The user can select between two representation mode: linking all 3 virtual world coordinates to the 3 spatial coordinates or replacing one of the virtual world coordinate by the time.
Users provide the initial position and orientation of the geodesic curve based on the position and orientation of the tracked datagloves. Then multiple model of geodesics are available: sprays (same initial positions and velocity magnitudes but different initial directions), rakes (lines of initial positions of geodesics all of which have the same initial velocity vectors), tubes (initial positions distributed in a circle perpendicular to the initial velocities), lightsphere (same initial position whose initial directions are equidistributed over a sphere), lightcone (initial spacetime directions of a spray of null geodesics).

[1] S. Bryson, “Virtual spacetime: an environment for the visualization of curved spacetimes via geodesic flows,” in Proceedings of the 3rd conference on Visualization ’92. IEEE Computer Society Press, 1992, pp. 291–298.