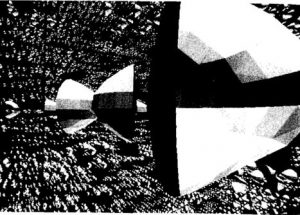 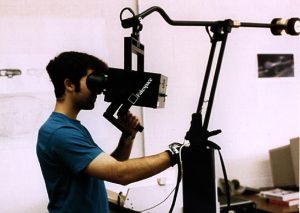 The virtual windtunnel is the first immersive analytics application. Using it scientists were able to effectively visualize the complexity of three-dimensional unsteady flow patterns while being immersed in it. The use of virtual technology allowed the user’s presence to not disturb the flow.

A BOOM (Binocular Omnidirectional Orientation Monitor) is the main rendering display, a CRT projection-based display mounted on a robotic arm equipped with servo-motor to ensure movement of the structure remained smooth and effortless. A non-linear movement law is implemented for the user to cover the whole virtual world. The flowfields are visualized by injecting particles through seed points in the virtual environment and observing their trajectories. The seed points are virtual tools which are manipulated through pinch gestures with datagloves.

Collaboration in the virtual windtunnel was done by connecting two BOOMs to the same virtual environment and interaction were managed on a first come first serve basis. Moreover, rendering and simulation computation are split between two computational cluster to ensure the minimum framerate of 8 fps.